Sanlorenzo is the protagonist of the new “Stile a bordo” (“Style on board”) book by Decio Giulio Riccardo Carugati and published by Mondadori Electa, which has been presented on Wednesday, February 21 at the Galleria Rizzoli bookstore in Milan. 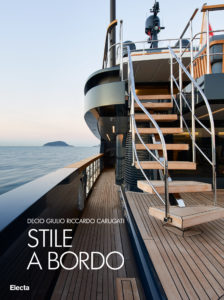 It is an elegant volume dedicated to the story of the excellence of Sanlorenzo and the innovative approach that, over the years, has enabled the company to expand its creative range, opening itself, as a pioneer in in this context, to different worlds that speak related languages such as art and design. It is a choice that has led Sanlorenzo to revolutionize the way of “living on board” without betraying its own style distinguished by its simplicity of form.

Thanks to the management of President Massimo Perotti and the role played by Sergio Buttiglieri, Style Director of the yacht division of the company, Sanlorenzo has in fact pursued new and unexpected paths: the desire to leave old practice behind has given life to collaborations with Dordoni Architetti, Antonio Citterio Patricia Viel and  who have produced a total revolution of the aesthetic codes of nautical design through the adoption of a series of innovations and stylistic elements that have enabled them to bring the concept of “home living” on board.

On one hand, the work on the element of space, while still tied to the constraints of the structure of a yacht, seems to expand endlessly thanks to the destruction of barriers and the creation of a single space that develops fluidly throughout the cockpit, on the other a new way to interpret illumination, always an essential, important element on the lower deck, that designs the spaces scenographically, providing them with the warm atmosphere of a home. Once again, it is the search for balance between interior and exterior spaces in the vein of maximizing harmony

“Sanlorenzo: the sea in Milan” at the Triennale di Milano on the occasion of Design Week 2017, as well as the exhibits on board Sanlorenzo’s yacht dedicated to the Italian Monochrome painting during Art Basel Miami Beach 2016 and the tribute to Alighiero Boetti on the occasion of the 57th Biennale d’Arte, both in collaboration with Tornabuoni Arte Gallery.