Talking about yachts and innovative design in the same sentence may seem a little oxymoronic at times. Particularly if the craft concerned are production or semicustom models as these are almost always little more than variations on same old tried-andtested themes. Sometimes, however, we really do find ourselves confronted with a genuinely different craft. 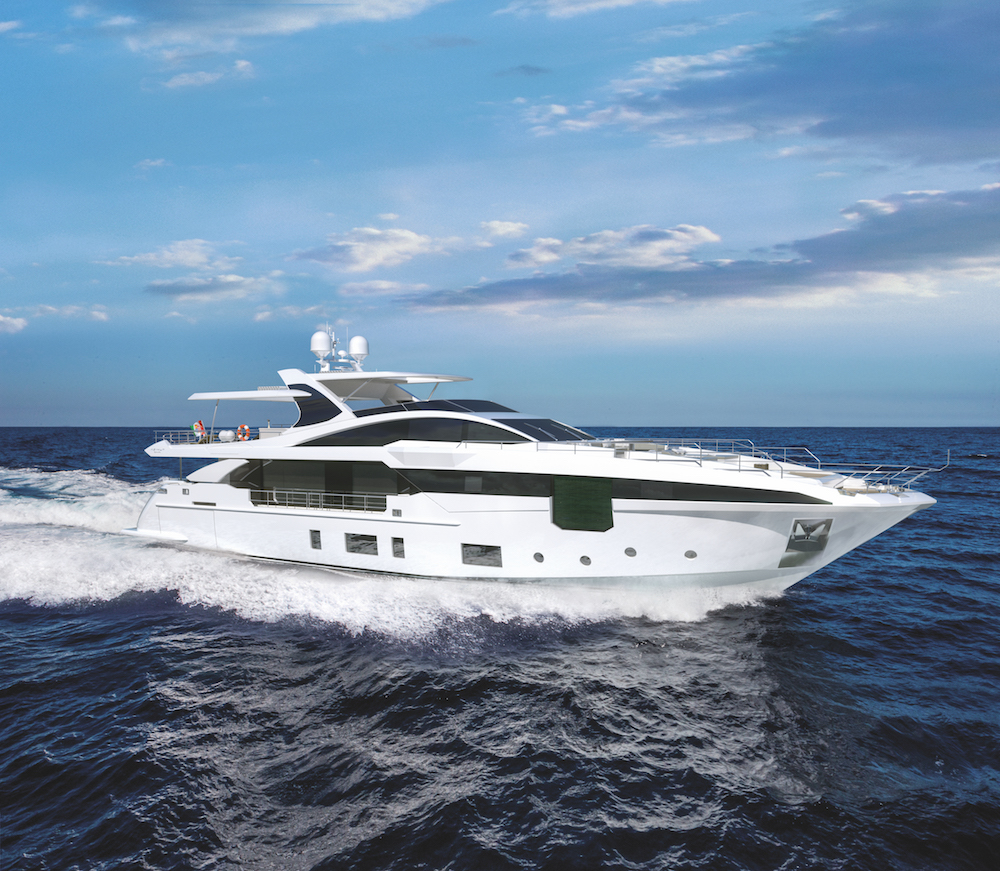 A yacht designed in line with traditional styling cues but also with an eye to the future, a vessel that positively bristles with carefully concealed technologies and reveals interiors that are a complete departure from yacht design tradition. The Azimut 115, which is due to splash in the course of 2016, is one such yacht. With a length overall of 35 metres, it will be the new flagship of the Azimut Grande series. “Overhauling our over-30-metre range was something we needed to do,” explains Azimut Grande brand manager Luca Cristino. “The 105 and the 116 had become a little dated and rather than just restyle them, we decided to design a whole new model that would give us the opportunity to do something a bit bolder”. 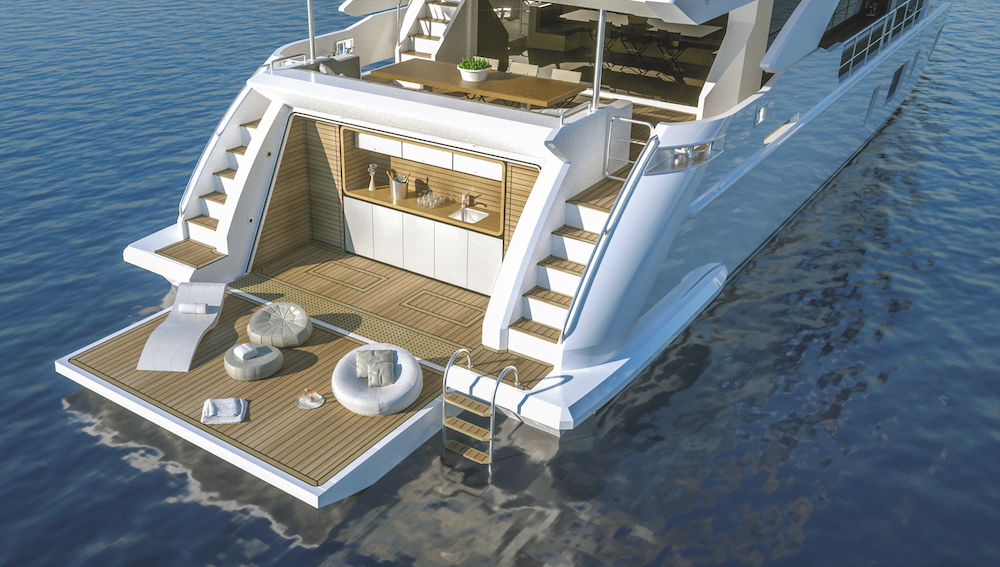 The 115 has a carbonfibre laminate superstructure to keep its weight down and allow the fly to be extended without creating structural problems. Its other major novelty is hidden away beneath the water. In a first for an Azimut, the 115 has a semi-planing hull with a wave piercer, a bulbous bow that yields a 15 per cent saving on fuel and, more importantly still, improved performance at both low speeds and planing. 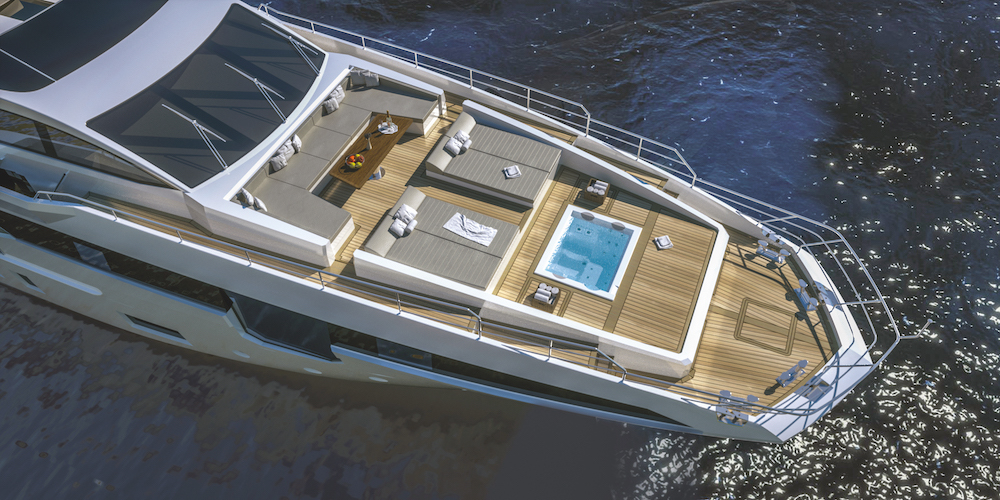 Performance-wise, the Azimut Grande 115 more than lives up to its moniker too. Packing twin 2,400 hp MTUs, it makes 25.5 knots at full throttle and, courtesy of 18,000-litre fuel tanks, has a range of 500 miles at its cruising speed of 21 knots with lateral stabilisers. At 12 knots, it will go for 1,100 miles. Spread over two decks plus a fly, the Azimut Grande 115 holds RINA Pleasure certification and is clothed in clean lines. 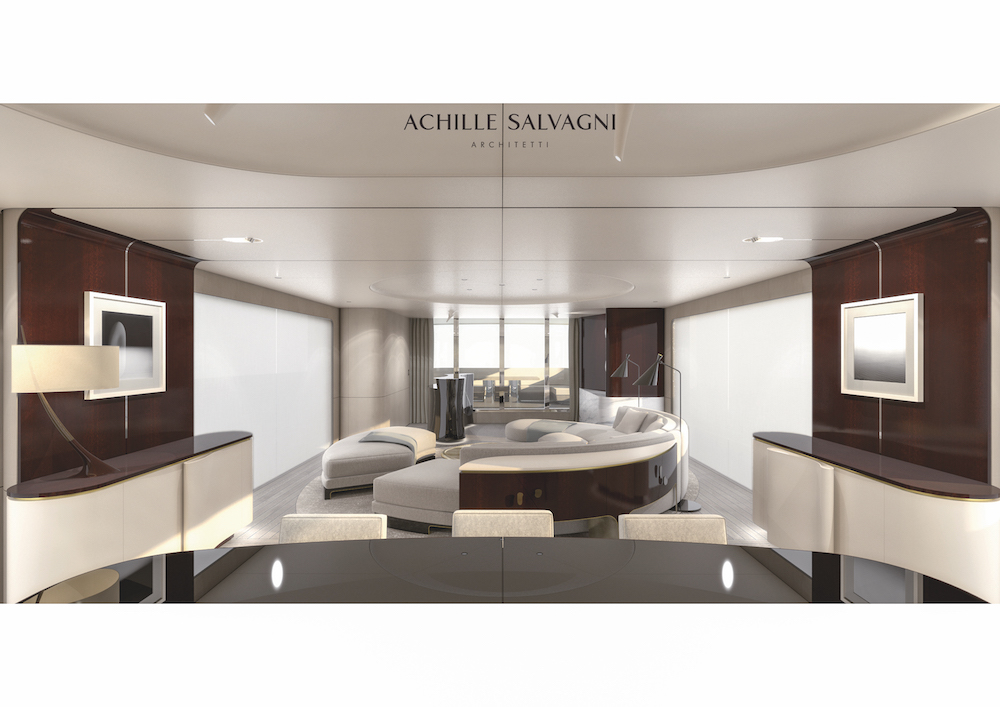 Teak abounds and the deck spaces are genuinely generous for a 35-metre yacht. The saloon, for instance, offers 60 square metres while the fly is a truly spacious 72 square metres. The beach area adds another 40 and even the optional sun deck comes in at 30, so when we say, there’s lots of space, we really do mean it. 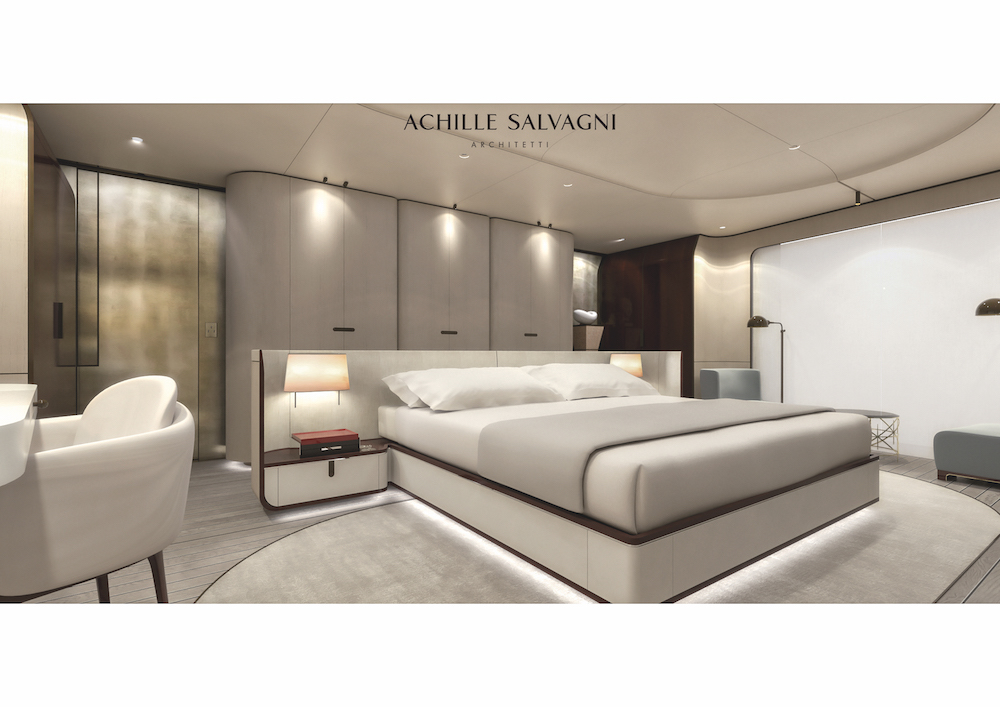 The main deck features a cockpit aft and a large forward lounge area on different levels that also  includes a sunning zone, a chill-out area with sofa and table and a Jacuzzi forward. One of the most unusual features is the aft section of the sun deck cover which can be converted into a further sunning area by replacing the textile cover with teak  flooring. 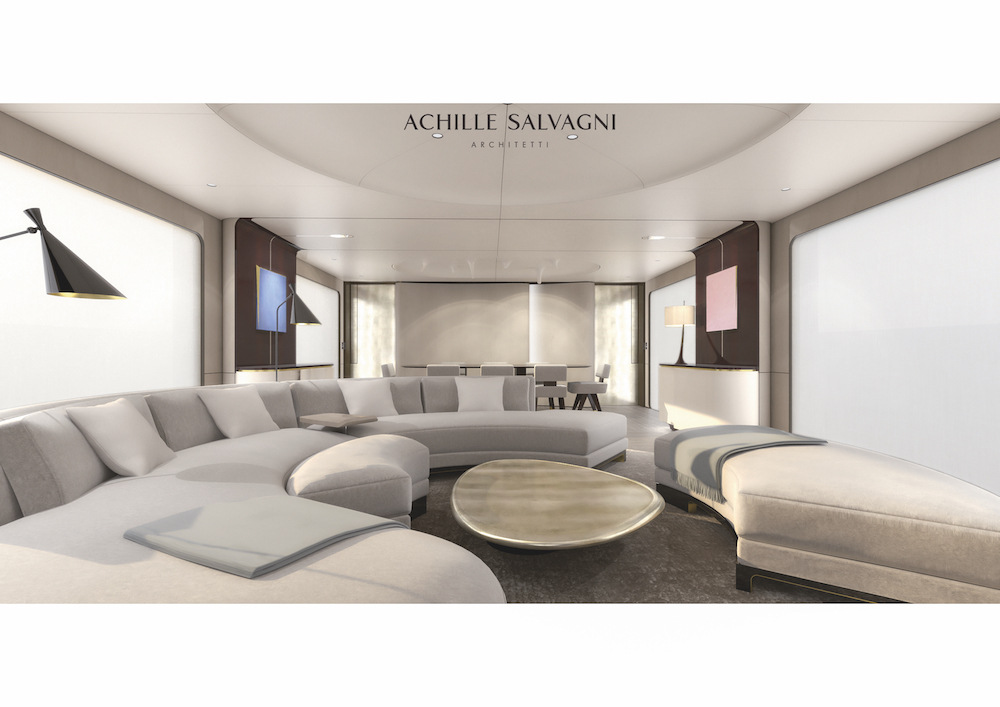 The interiors are the work of Achille Salvagni and deliver a nice flow of recurring sinuous forms that create a linear yet dynamic ambience. This is embodied most clearly on the main deck by an unusual round sofa right in the middle of the saloon. 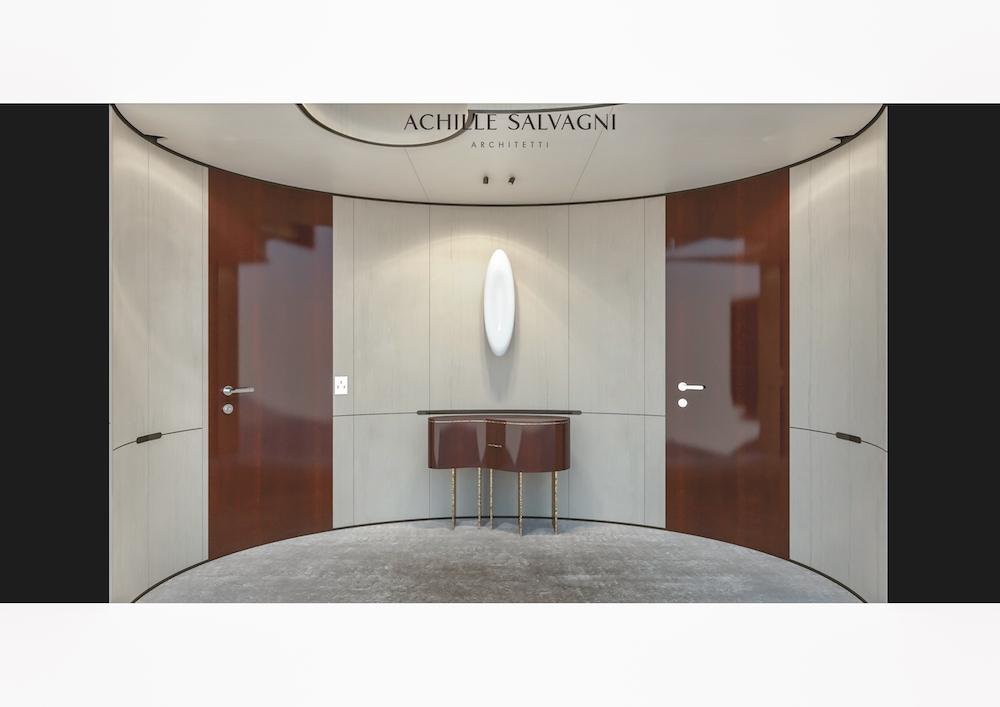 The Azimut Grande 115 will also have five guest staterooms – the master will have its own open-out balcony on the main deck. There will also be four guest cabins as well as a large flying bridge complete with dining table and wet bar. The garage is aft but designed to leave room for a beach area which has its own exterior area and exterior access from the main deck. 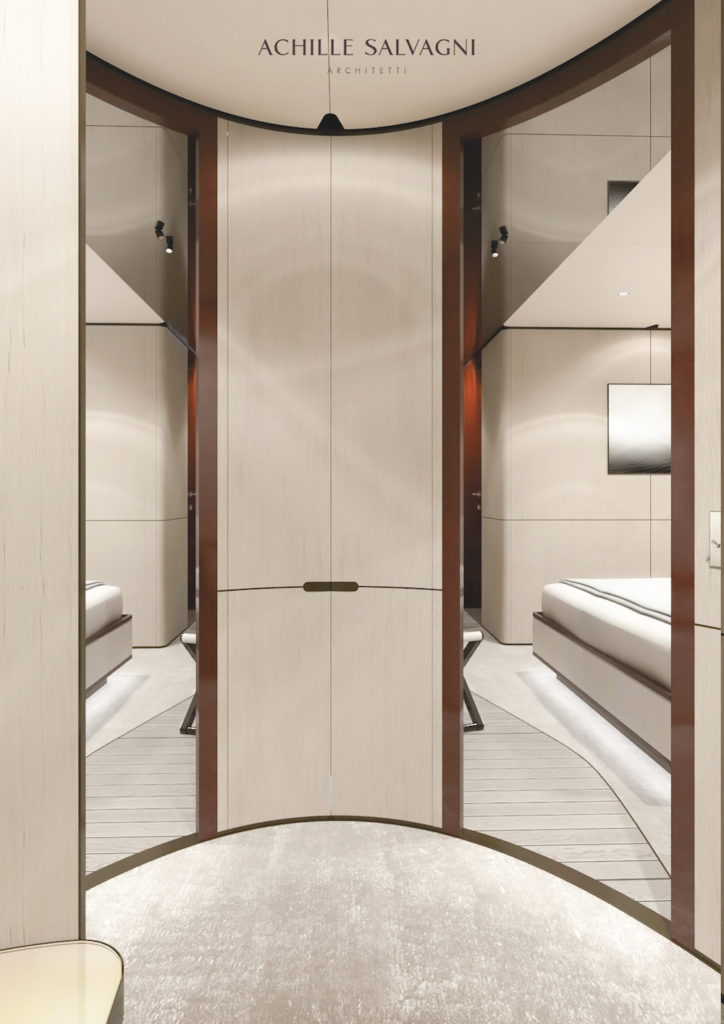