There are two vital statistics that prove Atlante is a genuinely unique yacht well beyond her stylistic identity. Those numbers are 30 and 320,000. The number of months and man hours it took before the 55-metre finally slid down the slips at the Ferretti Group’s CRN yard. “As she gradually took shape,” says CRN project and after-sales manager Simone Lorenzano, “we realised that Atlante would be unique to an absolutely unprecedented extent”. 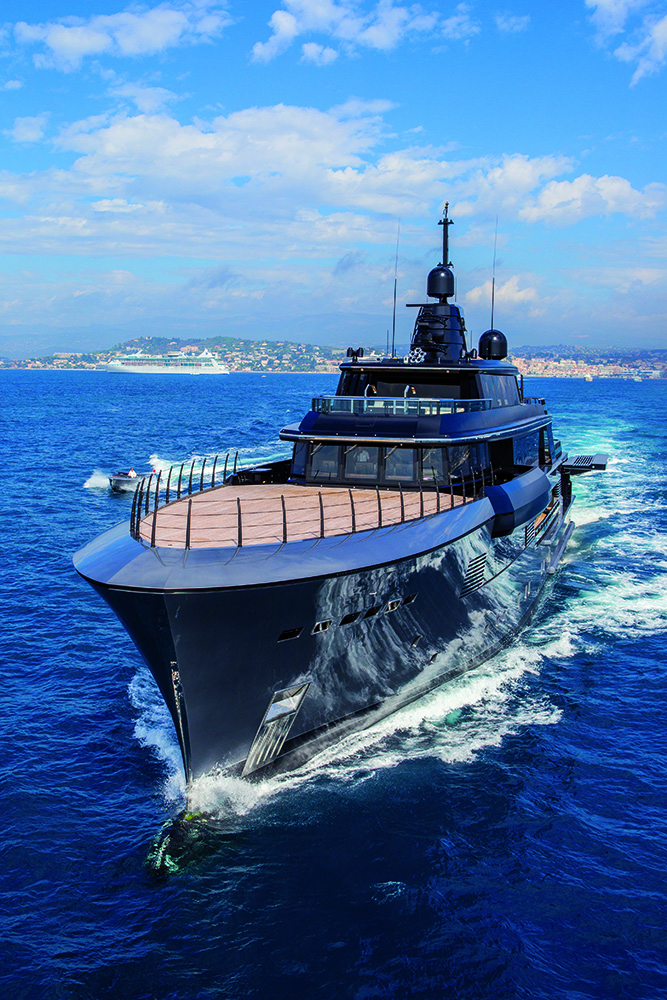 The yard’s sales and marketing manager Luca Boldrini adds: “The owner wanted something really different but we were astonished when he said he wanted a yacht that was very masculine and sporty. Special”. With her square-isa forms, broken, angular lines, military vessel profile and high-tech content, Atlante really is a striking departure from the super yacht norm. “Aggressive but balanced,” is the description given to us by Dan Lenard who, with his partner Carlo Nuvolari and their staff, penned Atlante’s exterior. 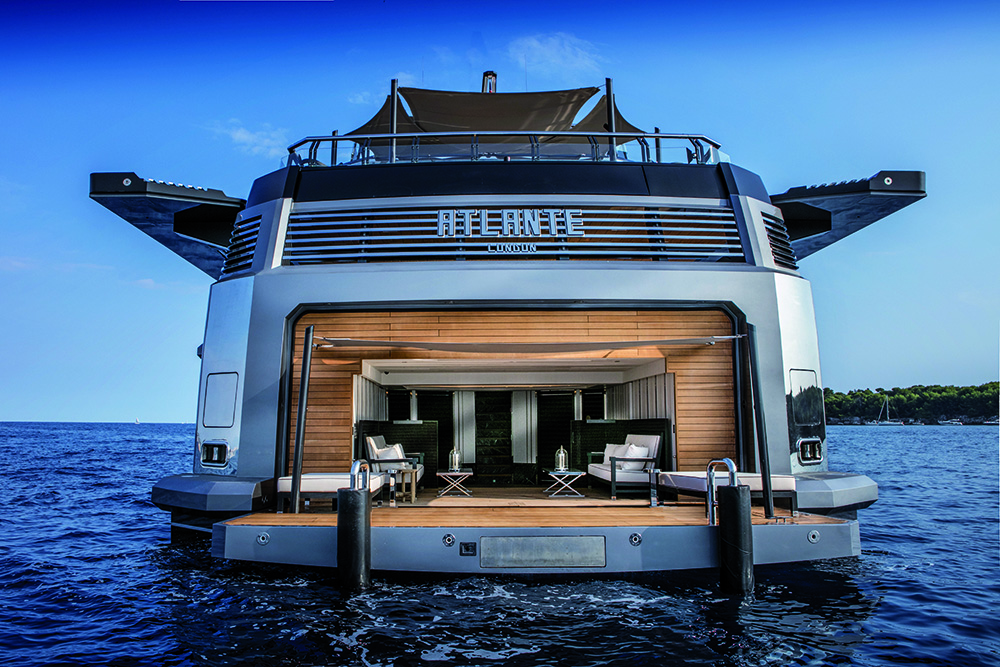 “She is an incredibly impactful yacht but her powerfully military look softens when she’s at sea” Her unconventional lines apart, however, Atlante also has many other deeply radical characteristics. “We wanted to really break down the barriers between interior and exterior,” explains Lenard. 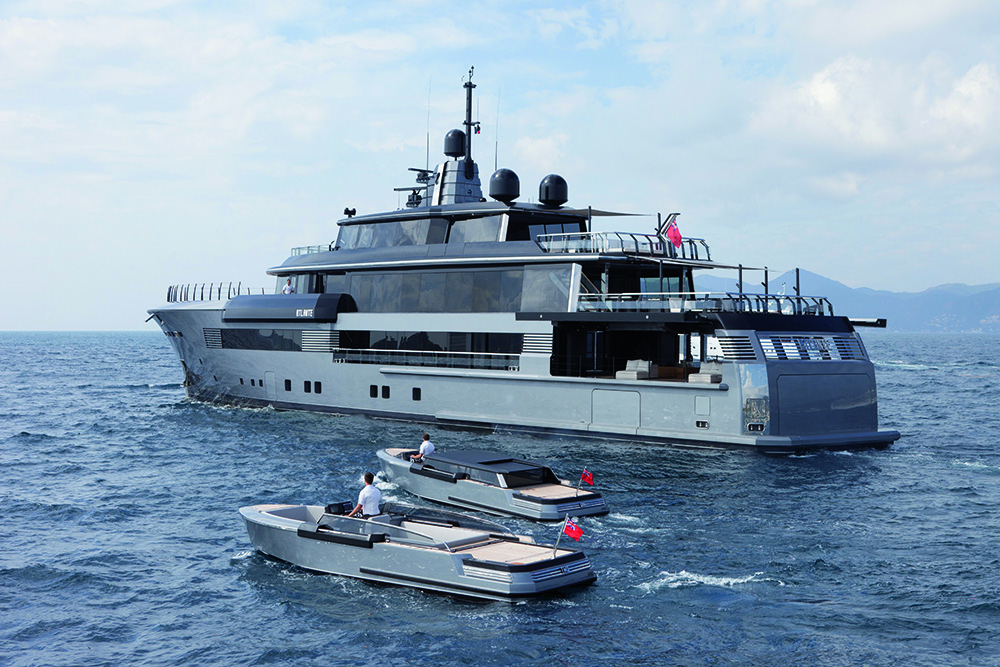 That meant using a lot of glass. “Almost 200 square metres of glazing to be precise,” adds Lorenzano. “The owner wanted to immerse himself as fully as possible in the natural world around him and that’s why the windows all over the yacht are full-height”. Another through the beach club on the transom which acts a foyer. 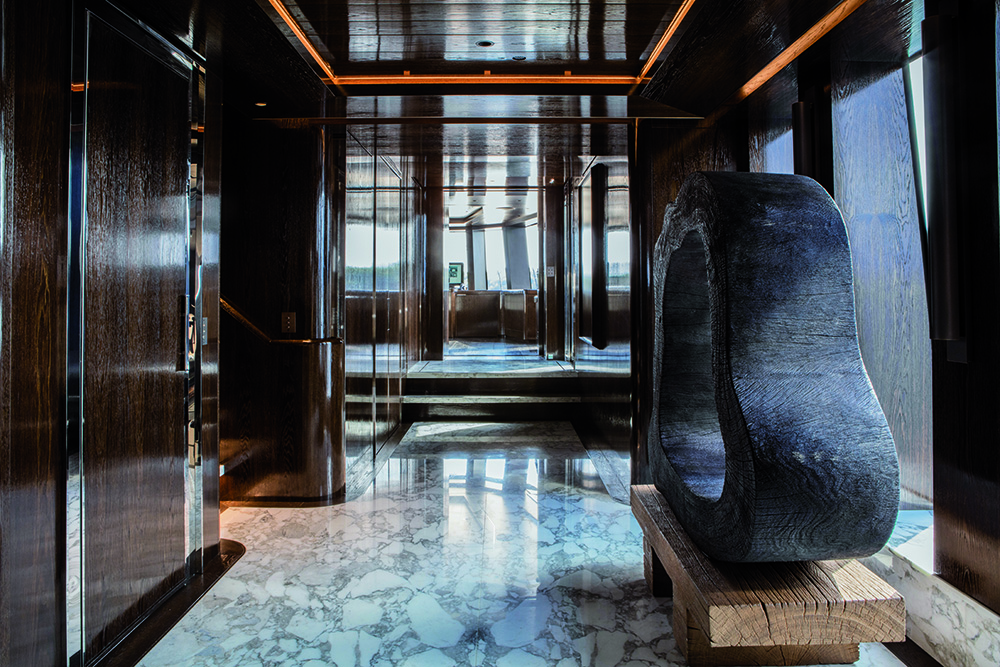 From there a beautiful stairs leads up to the main deck. The four-decker, however, is very much an uncluttered, open-plan kind of girl. On the foredeck, for instance, all the hardware is stowed below deck. Multifunctional spaces abound too, such as the aft section of the main deck where the zones designated to stowing the two tenders can convert to a lounge, communal area, sea terrace or dancefloor, all directly connecting with the main saloon. 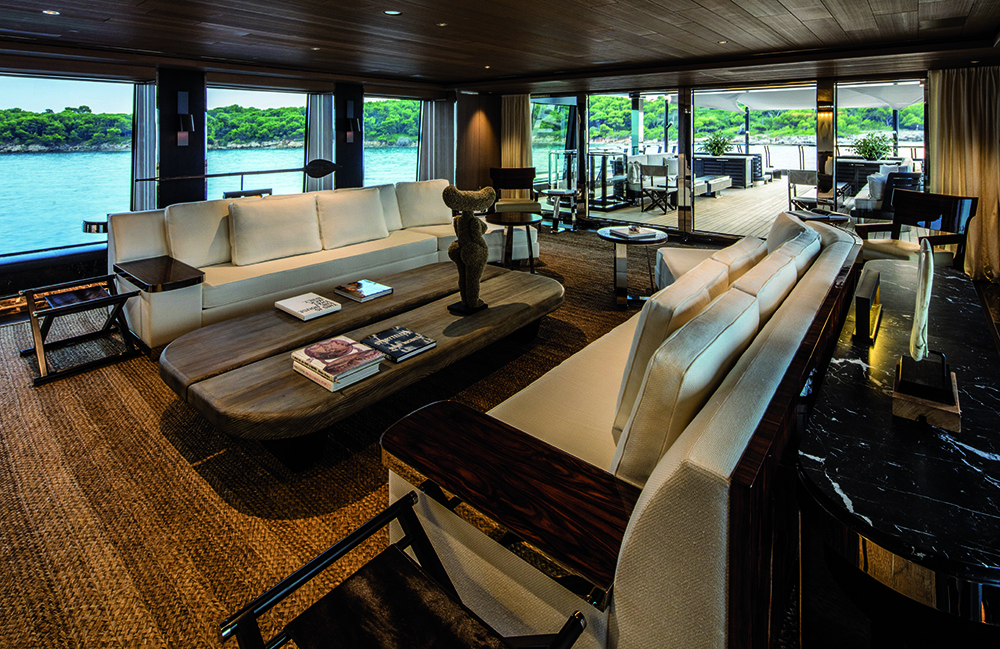 In the latter designers Gilles & Boissier give the first demonstration of their skilled interpretation of the owner’s tastes with a refined yet soothing combination of smoked oak, occasional tables that meld wood and marble with metal legs, and rosewood sofas upholstered in light Loro Piana fabrics. After the saloon comes the lobby which is dominated by a spectacular pale marble staircase leading to the lower deck and its four VIP staterooms. 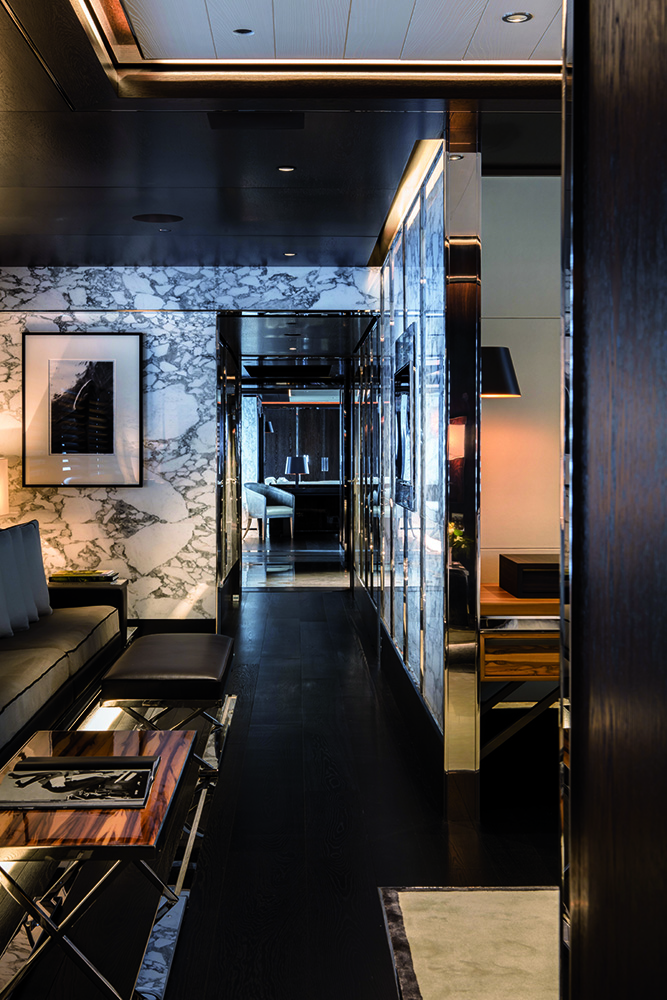 “We used 20 tons of marble overall,” explains Lorenzano. Beyond the lobby is the full-beam owner’s suite where Gilles & Bossier bring together all of the materials adopted aboard, ranging from white and brown brushed spruce to black oak, eucalyptus and also marble flooring. The result is elegant and contemporary. Eucalyptus, rosewood and leather are put to good effect in the lounge on the upper deck which also features Atlante’s signature huge windows. 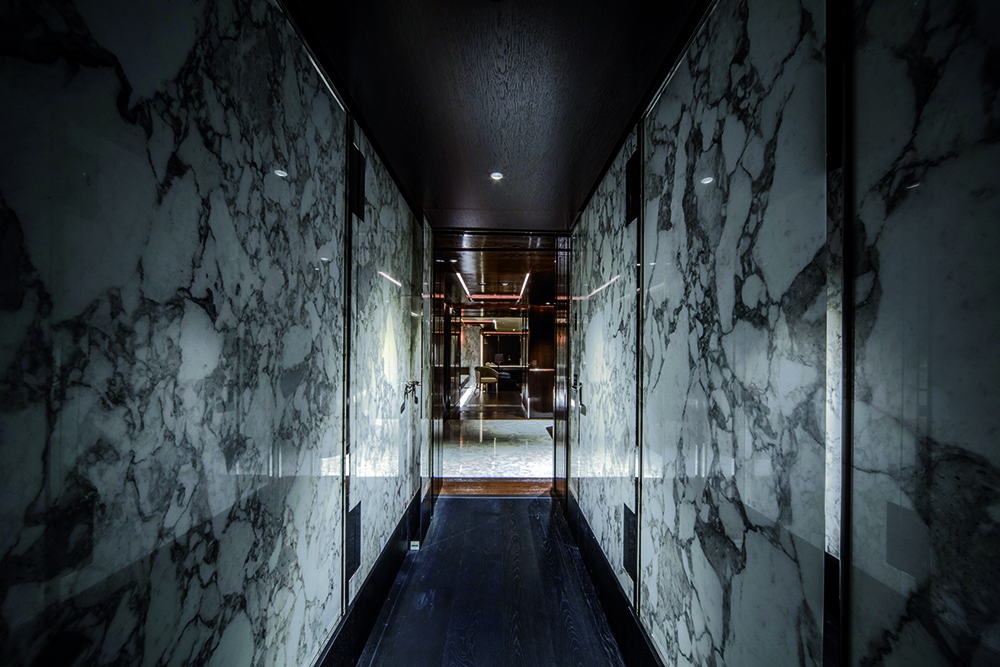 An astonishing six-metre-wide glass door opens on to the aft terrace and acts as a second guest entry point thanks to an unusual hydraulic passarelle. The pilothouse is forward on the upper deck and features an integrated Telemar bridge as well as the onboard domestics system supplied by CRN’s partner Videoworks. 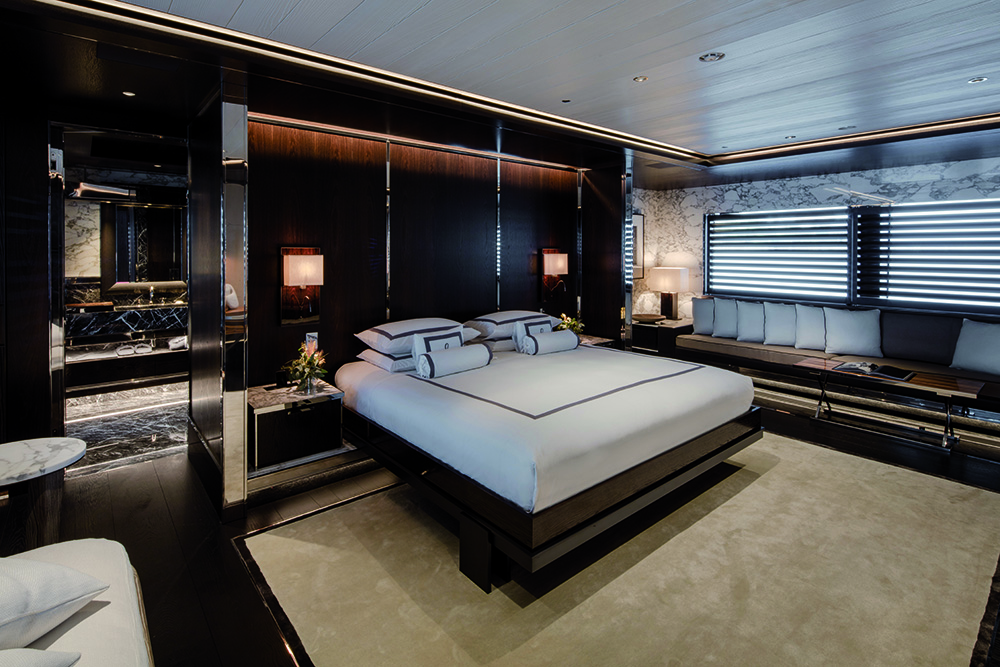 It leads out to the forward area too where there is an up-anddown hideaway table, free-standing seating and a large open space that doubles as a touch-and-go helipad. Last but very far from least, the sundeck is devoted entirely to the art of relaxation and also features another of the strongest signatures of Atlante’s exterior design: polished stainless steel handrails that have an unusual trapezoid shape. The gleaming reflections and glints from their multifaceted surfaces add an extra allure to the already-fascinating Atlante, a yacht with a uniquely powerful personal style.